Halal is an Arabic word meaning lawful or permitted. The opposite of halal is HARAM (حرام ), which means unlawful or prohibited.

All foods are considered halal except the following (which are haram):

Swine/Pork and its by-products - Read more on WHY PORK IS PROHIBITED
Animals improperly slaughtered or dead before slaughtering
Alcoholic drinks and intoxicants
Carnivorous animals, birds of prey and certain other animals
Foods contaminated with any of the above products

Foods containing ingredients such as gelatine, enzymes, emulsifiers, and flavors are questionable (mashbooh), because the origin of these ingredients is not known.

The Islamic practice of slaughtering animals by means of a sharp cut to the front of the neck has frequently come under attack by some animal rights activists as being a form of animal cruelty, the claim being that it is a painful inhumane method of killing animals. In the West, it is required by law to stun the animals with a shot to the head before the slaughter, supposedly to render the animal unconscious and to prevent it from reviving before it is killed so as not to slow down the movement of the processing line. It is also used to prevent the animal from feeling pain before it dies.

It therefore may come as a surprise to those who have made such acclimations to learn of the results of a study carried out by Professor Wilhelm Schulze and his colleague Dr. Hazim at the School of Veterinary Medicine, Hannover University in Germany. The study: ‘Attempts to Objectify Pain and Consciousness in Conventional (captive bolt pistol stunning) and Ritual (halal, knife) Methods of Slaughtering Sheep and Calves’ concludes that Islamic slaughtering is the most humane method of slaughter and that captive bolt stunning, practiced in the West, causes severe pain to the animal.

In the study, several electrodes were surgically implanted at various points of the skull of all animals, touching the surface of the brain. The animals were allowed to recover for several weeks. Some animals were then slaughtered by making a swift, deep incision with a sharp knife on the neck cutting the jugular veins and the carotid arteries as well as the trachea and oesophagus (Islamic method). Other animals were stunned using a Captive Bolt Pistol (CBP). During the experiment, an electroencephalograph (EEG) and an electrocardiogram (ECG) recorded the condition of the brain and the heart of all animals during the course of slaughter and stunning.

The results were as follows:

1. The first three seconds from the time of Islamic slaughter as recorded on the EEG did not show any change from the graph before slaughter, thus indicating that the animal did not feel any pain during or immediately after the incision.

2. For the following 3 seconds, the EEG recorded a condition of deep sleep - unconsciousness. This is due to the large quantity of blood gushing out from the body.

3. After the above-mentioned 6 seconds, the EEG recorded zero level, showing no feeling of pain at all.

4. As the brain message (EEG) dropped to zero level, the heart was still pounding and the body convulsing vigorously (a reflex action of the spinal cord) driving a maximum amount of blood from the body thus resulting in hygienic meat for the consumer.
For More Info. www.thequraninstitute.com 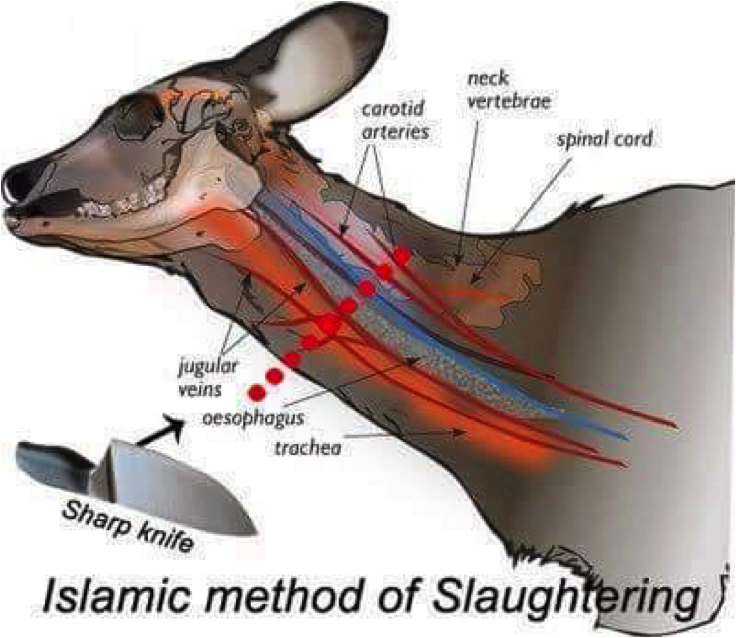 In defining an approach and standard for Halal, HMC has adopted a universal set of criteria that is accepted by all.

HMC will only operate in EU approved licensed Abattoirs when supervised by a qualified vet from Meat Hygiene Services (MHS). Under UK Law the MHS has legal responsibility for animal welfare, health and hygiene issues. Their stamp is legal requirement required to declare meat “fit for human” consumption. HMC will not work with any plants that are not EU approved.

In addition, HMC will supervise compliance with Halal Standards – something that the MHS does not undertake. HMC supervises all Halal production to ensure compliance with HMC’s Halal criteria and including checking that all slaughtermen are practising Muslims holding a valid slaughter license. HMC have a unique labelling system in place which is implemented from the point of slaughter onwards to ensure maximum transparency, allowing HMC products to be accepted globally without contention.

The following describes some of the key criteria for Halal adopted by HMC:

In addition, all meat is labeled and sealed (where appropriate) and checks for cross contamination are made. HMC will not operate at plants where pork is handled.

The HMC system is based on very clear and defined procedures to ensure all products are genuinely Halal. It is more than just checks at the slaughterhouse. HMC also monitors restaurants and butchers to validate that they only sell HMC meat that can be traced back using its unique serialised labels. This is supported by active monitoring of outlets by trained monitors on an almost daily basis.

An outlet is only considered to be “Certified” when they agree to purchase and supply products which have been vetted by HMC's robust system and allow for active monitoring of their premises.

For more information, read below...

More about What is Halal...

HALAL: This is an Arabic term which means permissible or lawful in Islam. In reference to food, it is the Islamic dietary standard, as prescribed in the Shari’ah (Islamic Law).

HARAM: This is another Arabic term which means impermissible or unlawful in Islam.

Rasulullah sallallahu alayhi wasallam said: “Halal is clear and the Haram (unlawful) is clear. Between the two there are doubtful matters concerning which people do not know. One who avoids them in order to safeguard his deen (religion) and his honour are safe, while if some one indulges in it, he may be indulging in the unlawful……”  (Bukhari)

General Qur’anic guidance dictates that all foods are Halal except those that are specifically mentioned as Haram (unlawful or prohibited). The Glorious Qur’an reads:

“O ye who believes! Eat of the good things wherewith we have provided you, and render thanks to Allah, if it is He whom ye worship. (chapter II, Verse 172)”

The unlawful foods are specifically mentioned in the Glorious Qur’an, in the following verses:

“He hath forbidden you only carrion, and blood, and swine flesh, and that on which hath been invoked any other name besides Allah’s……..” (Chapter II, Verse 173)

Consumption of alcohol and other intoxicants is prohibited according to the following guidance:

“O ye who believe! Intoxicants and games of chance, and idols and divining arrows are an abomination of Satan’s handiwork. Leave it aside in order that ye may succeed.” (Chapter V, Verse 9)

Meat is the most strictly regulated of the food groups. Not only are blood, pork, and the meat of dead animals or those immolated to other than Allah strongly prohibited, it is also required that the Halal animals be slaughtered while pronouncing the name of Allah at the time of slaughter.

“Eat of that over which the name of Allah hath been mentioned, if ye are believers in his revelations” (Chapter VI, Verse 118)

“And eat not of that whereon Allah’s name hath not been mentioned, for lo! It is abomination. Lo! The devils do inspire their friends to contend with you. But if ye obey them, ye will be in truth idolaters”. (Chapter VI, Verse 121)

Attempts have been made to explain or justify some of the prohibitions based on scientific reasoning as follows:

Although these explanations are sound, the underlying principle behind the prohibitions remains the above mentioned Divine orders.

Accordingly, Muslims permit all foods, pure and clean for consumption. Islamic Jurisprudence has derived certain principles from the Ahadeeth to determine whether a particular animal or bird is lawful or unlawful.

The following animals are fit for Muslim consumption:

The aforementioned animals excluding fish and locusts will only be considered Halal when they are slaughtered according to the following guidelines:

The consumption of the following animals is against the dietary laws of Islam. Likewise any ingredient or product derived from them or contaminated with them is also prohibited for a Muslim to consume: